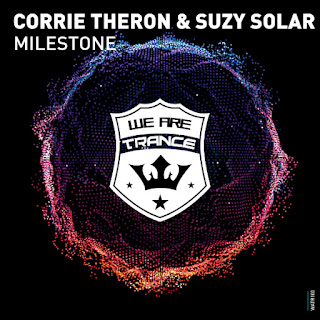 What does the word milestone mean to you? Usually it has to do with one's achievements over the years or even in a short period of time, depending on one's goals and good fortune. South African label "We Are Trance", owned and operated by South Africa's very own DJ/Producer with a dream, "Dirkie Coetzee", has been ascending the ranks of the genre over the years. Who would have thought that this month amongst all of the ordeals of the year there would be a cause for joy and celebration. Joyous as can be they have reached their hundredth release on the label. Now of course a milestone such as that had to be dealt with accordingly and so fellow South African artist and A&R of the label, "Corrie Theron" has teamed up with American artist and fellow A&R of the label "Suzy Solar", for an enticing new release. This happens to be the first collaboration between these two talented artists and is in fact Corrie's first vocal trance release as well so there's another milestone to celebrate the occasion also. Putting his production expertise to test while utilizing Suzy's uncanny vocal capabilities has brought us something truly divine. These two really conjured up something special indeed.

From the very beginning the listener is thrown pleasantly aback by a swarm of uplifting moments, charging basslines, fairy-tale like melodies and pounding kicks alongside a sea of serene chopped female vocals. All of these elements are there to prepare us for our upcoming adventure in sound. Following close by we are pleasantly surprised by a medley of ethereal melodies comprised by violins, a collection of strings and the steady beat of the drums followed by Suzy's breathtaking vocal performance. Majestic, true, emotional and energetic as can be like the killer optimistic fueled leads that spring into the open much like a ferocious feline of the jungle itself.

Inspiring, big tune that perfectly encapsulates "We Are Trance's" moment of glory. A big round of applause goes out to Corrie and Suzy for their meticulous work on this incredible anthem! Here's to many more releases on the label!

Label: We Are Trance