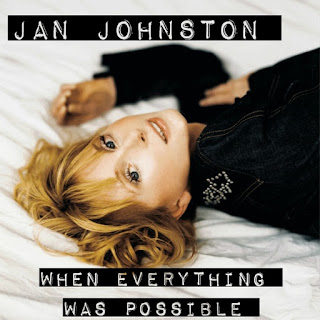 Anyone that has followed the evolution of dance music from it's early beginning up to it's current state, is certainly familiar with one of the leading ladies of the scene. Singer/Songwriter Jan Johnston has accomplished so much in her career and inspired many artists and fans alike with her story telling lyrics and enchanting voice, making every track she has worked on a track that will endure the sands of time and remain intact in one's memory.

Like precious gems unearthed, rescued from a fate of darkness, now gleam in the sun spreading light and hope to the joyous listener who has the good fortune to purchase her album entitled "When Everything Was Possible". It is a rare collection indeed, created along with Jamie Myerson in 1999 and still does the trick after all these years.

Tales of love, anguish and two souls that remain apart, heartbreak, longing and thoughts of a significant other are few of the examples of emotional and mystifying tales included within this album.
A fine blend of down tempo, chill out while adding a pinch of drum & bass infused slightly with trancy elements and there you have it, a recipe for success.
Lots of depth and emotions are encapsulated within as Jan takes the leading role, hypnotizing us all with her soothing, uncanny vocals, like a modern day siren of the sea.
The choice of picking a favorite amongst all these emotional tales proves to be quite a difficult task. Every single track tells a different story, drenched in emotion, lush melodies and gripping soul grasping vocals.

If you are wishing to unwind after a hectic work filled week, then indulge yourself to a rare treat and intoxicate yourself from the troubles of everyday life by diving head first into the depths of this pool of serenity.

Posted by MusicTalk at 10:57 AM No comments: