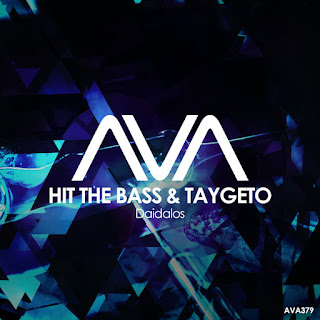 One of the producers on the rise in the European dance music scene is an artist that goes by the explosive name "Hit The Bass". Dimitris from Greece has been pouring all of his heart and soul into the vast array of his very own productions and collaborations with fellow dance music artists such as "Danny Cullen", "Taygeto", "Gid Sedgwick" and many more. The populous and artists alike have definitely been responding positively to his talent of forging those eclectic trance beats. He can proudly boast on having releases on esteemed labels such as "Reaching Altitude", "AVA Recordings" and "Armada Music" among others. Aside from feverishly assembling his own creations in the studio he also coaches and trains the next generation of music producers in his very own school "Grey Studios". One of his newest creations finds him teaming up with Italian artist "Taygeto" once more as they make their way together towards familiar turf: "AVA Recordings". "Daidalos" is most definitely inspired by the well known Greek myth of "Icarus", the youth that tried to defy his mortal boundaries and fly as high as the sun. In said myth "Daidalos" was the inventor/engineer if you will of flight itself and "Icarus's" beloved father.

Grimy basslines paired up with ecstatic rhythms lead the way as intriguing melodies surface through the laid atmosphere at hand. Female chopped vox are included bringing forth an ethereal wind of change to the epic atmosphere that begins to unfold. An air of positivity, glorious adventure and infinite potential emerges while the listener is pleasantly flooded with feel good vibes, courtesy of the higher than air leads that take instant charge. A euphoric tune of epic proportions that perfectly encapsulates the beloved myth, clearly stating that the human spirit can work wonders when flooded with ingenuity in the hardest of times, much like our heroes in their adventurous flight from their captors. A thrilling dance music offering by these super talents that will surely remain in your playlists for months on end!

Posted by MusicTalk at 10:53 AM No comments: