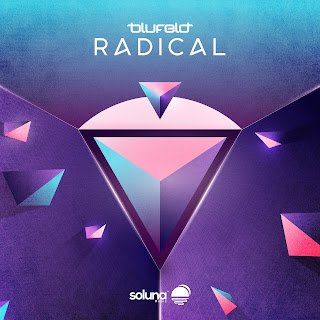 One of the UK's most innovative producers is without a doubt David Hearn, an artist that goes by the name "Blufeld". A true lover of the electronic sound, he has spent countless days, months and ultimately years perfecting his sound. Highly distinguished for his take on modern dance music, he certainly brings a breath of fresh air into the scene. Like a fine craftsman of old he spares no expense in forging and harnessing each beat, all the while adding that extra bit of flair that will separate him from the pack. His surgical precision of sound sculpting has undoubtedly taken him thus far. From debut artist album "All I Ever Knew" to "A World Less Ordinary" he has guided us along musical escapades traveling through unknown lands.

It is with great pleasure that I may now sit down and unravel his fresh artist album "Radical" exclusively for "MusicTalk" and for all of you my dear readers. Sit back, relax and let's dive deep into this glorious new album.

The title track of the album is what one may come to expect. It serves as a luscious intro to what lies ahead. Imagine crystal like sounds, retro basslines and robotic vocals intertwined between a fusion of 80's disco percussion re-imagined for 2020.

Carrying on from the previous number, this 8 Bit Boy ups the pace sending us straight to a freshly illuminated dance floor where disco balls gleam and the world comes together in unison. Joyous melodies, retro grooves and a nod to "New Order" courtesy of David's vocal talent. Brilliant.

Squelchy sounds, hypnotic melodies and sturdy basslines send us to a time when things were a tad simpler and the world was much brighter. As the title itself demonstrates this is a trip down memory lane for the artist and a whole generation. Captivating and mystifying tune that draws you ever inwards to the core of its essence.

Quirky, frisky beats and playful percussion moves our ever curious minds while those groovy vocals enhance the celebratory atmosphere furthermore. A joyous escape from the problems of everyday life as we all embrace, dancing under the inviting open sky.

A clever use of a video game sounding synth, which invokes the feeling of speed paired up with frenetic leads, steady basslines and a too fast for you approach from the vocalist literally sends us soaring along a virtual supersonic highway. Retro meets the future, leaving us with an adrenaline overdose.

Slapback bass and feisty percussion get things brewing while enigmatic sounds and effects pop out like groundhogs through the fresh soil while sheer, ethereal melodies break out into the open alongside happy go lucky vocals. This will totally yank you out of those days of feeling blue.

German by name, darker by nature. This one has a load of rich tones lined up amongst darker, shady undertones. Vocoded effects gradually glide upon a buildup of emotional tinged layers while a sense of melancholy looms throughout the track. Something to ponder about when getting lost within those deep beats.

"AI For Your Imagination":

An amalgam of retro grooves with a futuristic approach. Mysterious, slightly bleak yet simultaneously hopeful. The vocals add to the emotional puzzle one has laid out before him or her. Is the future bright and wondrous or would we rather go back in time?

"For One Good Reason":

Darker grooves lay the foundation for blossoming melodies, as the percussion adds a feeling of one walking along a dark pathway while the silvery moon rays shine down upon the sidewalk, drawing peculiar shapes. A number of synths add the wow factor to this as they appear to try to communicate with us while the vocalist follows suit. Addictive and memorable.

Sound effects from classic video games sprinkle an extra bit of flavor to this one while magical melodies flood the airwaves. A guitar riff segment emerges sealing the deal in bringing forth that 80s trademark sound of yesteryear while David wails on sending us literally back in time. The longing for an era long gone is evident.

Totally captures the title from the very first moment. The listener can already imagine themselves walking down empty streets, marveling at the many lights of the city, while looking up the galactic brightness of the twinkling stars. Mystifying, cosmic sounds with a retro twist unfold. Luminous yet dark and wonderful. As David clearly states "We are in night mode!"

Lush sounds bounce into lively emotional soundscapes full of feeling, longing and majestic, rich textures of sound. A perfect closing piece for this magical journey that "Blufeld" has taken us on.

A bold move from an artist that risks it all going the distance and will ultimately determinate his fate in our scene. I for one applaud his effort and believe that this kind of ingenuity, creativity and straight forward thinking is what the scene needs. Welcome to the radical new world courtesy of "Blufeld". You are all in for a grand surprise!