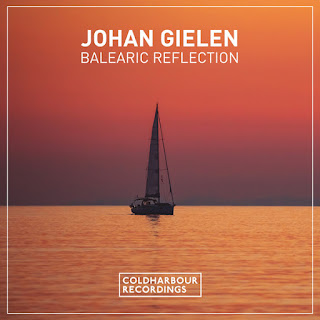 Trance maestro "Johan Gielen", known for his incredible performances over the years at some of the finest events and steady stream of sublime releases under his own name as well as his known partnership with fellow DJ/Producer "Svenson" under the "Svenson & Gielen" outfit has become something of a living legend in the scene.

Our heart skips a beat when news of a fresh "Johan Gielen" release is underway. It has arrived at last and is out now on fellow artist "Markus Schulz's" label, "Coldharbour Recordings". This is the second outing for Johan on the label, his first being his incredulous take on classic "Perception" by Markus featuring the illustrious vocals of singer/songwriter "Justine Suissa". This new release is called "Balearic Reflection" and it could not be more appropriately named as we all shall discover for ourselves.

Lush dreamy melodies, soft Latin percussion and a curious serenade of male and female chants which appear to be competing for their own space, ultimately come together quite rhythmically. The sound of chirping sea birds flood the air amongst moving basslines further enhancing the atmosphere within. Magical moments unfold as the sun's daily journey comes to an end, setting over the tranquil, undisturbed waters where one and all have come to marvel at the undeniable beauty of the extraordinary palette of colors on the ever expanding horizon. A feeling of inner peace, satisfaction and release stirs within us all as we unplug from the toxic habits and fast paced tones of society.

An experience that will awaken your inner self courtesy of Johan who has brought us all along to the magical island of Ibiza, one of the gems of the country of Spain. This "Balearic Reflection" will live on and resonate with us all for quite a spell.