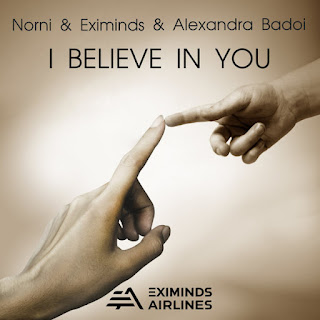 Always a sucker for artist collaborations here on MusicTalk15. In my last review I featured a massive collaboration between some talented artists that resulted into a phenomenal track and remix at that. Here is yet another review featuring three of clubland's rising figures. DJ/Producer "Norni" from Russia teamed up once again with fellow Russian DJ/Producer "Eximinds" and together they enlisted once more the vocal talents of Romanian singer/songwriter and DJ "Alexandra Badoi". Each artist has put in hours of work in perfecting their craft and fine tuning their sound. Norni's recent highlight was an amazing collaboration with singer/songwriter "Gid Sedgwick" dubbed "Ferris Wheel" which was very well received, while Eximinds has had a very steady flow of releases and countless support on radio shows around the world like "Andrew Rayel's" "Find Your Harmony". Alexandra Badoi has been on a quick ascend herself by working on loads of new material and displaying her DJ skills on her very own radio show "A Beautiful Cosmos". These three joining forces for "Believe In You" was a real blessing for us dance music fiends! Each artist has gone above and beyond to work his magic on here while Alexandra undoubtedly shines on vocal duties. Out now on "Eximinds Airlines", Eximinds's very own label, it promises to soar up there with the finest of vocal tunes.

Sturdy percussion leads the way alongside female vocal exhales and in your face basslines. As the beat builds Alexandra's emotional tinged vocals arrive, enveloping us all with an enormous feeling of hope and endless positivity. Instilling faith in ourselves, making us believe that we can achieve anything we wish to find in our path. The combination of the upbeat lyrics and emotional depth they contain makes us reach a new high while some of the most breathtaking melodies make their appearance, pairing up like a kind of modern sorcery with her sublime vocals and the ascending leads that follow. Fully taking in the atmosphere we are transported, if only temporarily, to a land where we can be the star of our own story and realize the conception of all of our long forgotten dreams much like a fairy tale from long ago.

A big round of applause goes out to these three artists who certainly gave us the ability to dream once more after the crazy and curious times of the year that we left behind!